Interface Fluidics provides testing services for energy operators that cover a slew of measurements. One of our valuable analyses involves the screening of chemical additives for enhanced oil recovery (EOR). These chemicals can include surfactants, polymers, CO2 foams, solvents, nanofluids and more.

While all of these are important, surfactants are a big part of the work we do at Interface – so here’s a more in depth look at them.

Surfactants are surface active agents, which means they absorb to the boundary between two immiscible (unmixable) fluids. By doing so, they reduce the interfacial tension (IFT) and modify the system’s wettability.

These agents are more common than you might think. If you’ve used laundry detergent or even washed your hands with soap recently – you’ve used one of many natural surfactants. They also have many industrial uses, including surfactants for oil production.

A surfactant is essentially a molecule with a water-loving (hydrophilic) and water-fearing (hydrophobic) end. When we add it to, say, an oil-water system, one end will be attracted to water and one to oil.

These agents can be classified based on the charge of their water-loving head. They can be non-ionic (no charge), cationic (positive charge), anionic (negative charge), or amphoteric (both positive and negative).

When these molecules arrive at the boundary of two fluids, they change a property known as the IFT.

This tension is, fundamentally, an adhesive force between two immiscible fluids. It causes the fluids to want to shrink in size. Surfactants reduce this force by disrupting the fluid structure that causes the attraction. 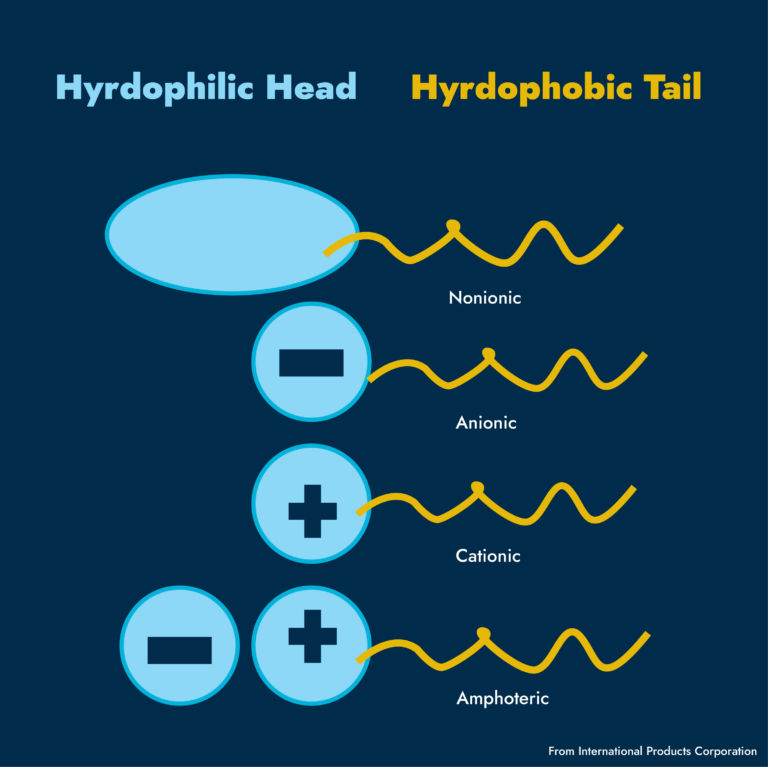 At high enough concentrations, they can also envelope inner molecules of oil that are surrounded by water. The resulting formations are called micelles, and the concentration threshold required for them to form is called the critical micelle concentration (CMC)

Micelles aren’t always desirable as they can reach up to 200 μm in size, thus plugging the smaller pores of shale formations. This means using a small concentration of surfactants in fracturing operations can lead to higher oil flowback in our flowback tests.

The second impact of these chemicals is on wettability.

Wettability is usually described as the tendency of a fluid to spread over and stick to a surface in the presence of a second immiscible fluid. The fluid more strongly attracted to the surface is referred to as the wetting phase.

The angle a drop of fluid makes with a surface is called its contact (or wetting) angle. There are three types of wettability depending on the value of the contact angle. Namely, water-wet, mixed-wet and oil-wet. This characteristic of the rock greatly affects reservoir permeability. 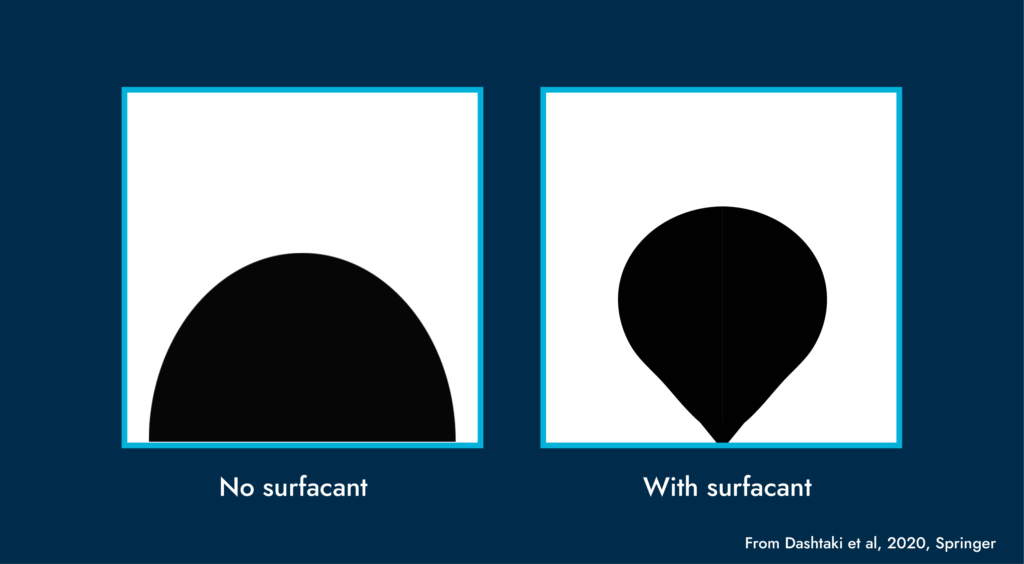 With a microfluidic chip (essentially made from silicon), Interface systems can achieve all three different types of wetting using proprietary aging and coating processes. Ultimately, the choice of wettability will be based on the client’s specific reservoir.

Where surface active agents come in is in their ability to alter a mixed-wet or oil-wet system into a water-wet one. How this ties into actual reservoirs is that it’s easier for water to replace oil if oil is the non-wetting phase, as it will be less attracted to the rock.

Initial wettability is a key parameter clients provide us, which we match. This is because a change in initial contact angle can have a strong impact on surfactant performance in terms of the change in contact angle and volume of oil flowback.

Using proprietary protocols, Interface is able to change the contact angle of our devices with a ± 10˚ sensitivity.

Can adding salt to a surfactant change its behavior?

Several factors affect agent performance. The following table illustrates some of these relationships. It should be noted that for a complex mixture of different surfactant types, most factors will have an impact.

Salinity has a more pronounced impact on ionic molecules. At low levels, surfactants are highly water soluble. For higher levels, they become highly oil soluble. At the optimum salinity, we get equal solubility and the lowest IFT. This is why it’s important to choose the right chemistry for the right brine.

Temperature is another important factor. The Krafft temperature is defined as the minimum point at which surfactants become effective, while the cloud point is the temperature at which solid precipitation occurs. These create a lower and upper limit to the surfactant choice as reservoir temperature itself isn’t something we can control.

The composition of the oil also matters a great deal. That’s why at Interface, we do our testing with a small sample of your live fluids. IFT and the point of optimal salinity also change with oil composition. 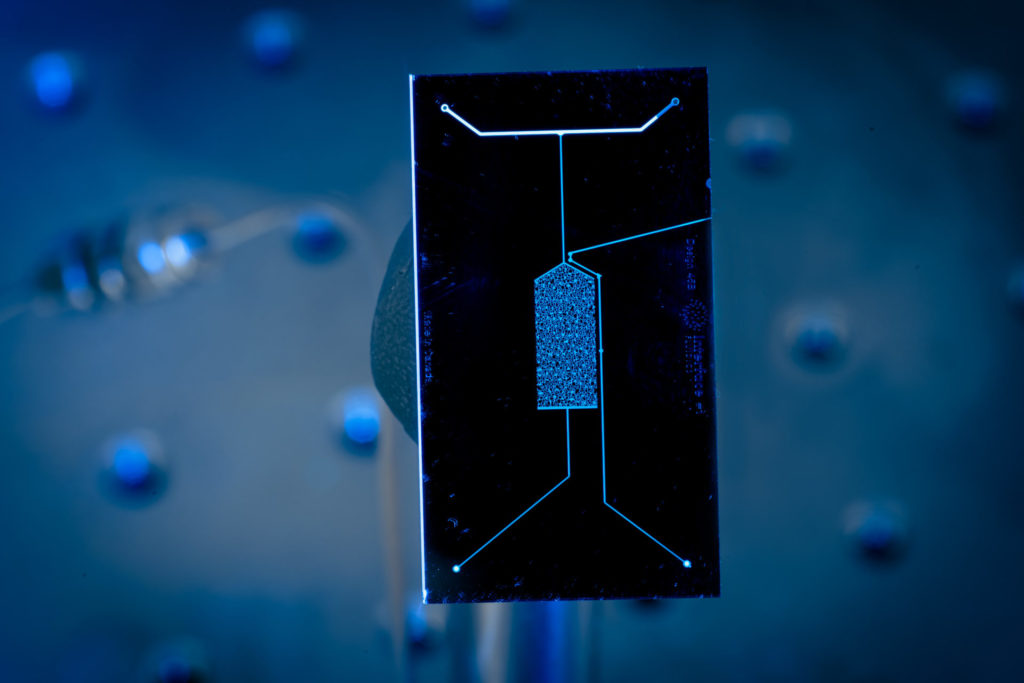 While unconventional reservoirs are major sources of hydrocarbons in North America, they are known to experience rapid declines in oil production.

This is attributed to low permeability as well as the oil-wet nature of the rock. Therefore, wettability alteration using chemical additives can be a useful form of EOR which increases production.

In a comprehensive analysis by Interface, a set of customized surfactants were developed and tested to increase oil recovery from shale oil reservoirs in the Permian Basin. Results showed that specific surfactants can increase recovery by altering wettability – without causing emulsion issues.

The most influential factors on performance were identified to include brine salinity and hardness, oil characteristics, reservoir mineralogy, and intensity of natural fractures.

One of the main variables affecting hydrocarbon flow in hydraulically fractured reservoirs is fluid flow from the matrix (the fractured network) to the fracture zone. Oil production from the matrix is primarily governed by spontaneous imbibition, which is driven, for the most part, by the capillary pressure.

Spontaneous imbibition can be defined as the natural process in which a wetting fluid displaces a non-wetting fluid in the pore space, resulting in the latter’s extraction. Preferably this will be water replacing and pushing out oil. But if the rock is oil-wet, this can be challenging.

Following the Young-Laplace equation for capillary pressure, we can see that the wetting angle, interfacial tension, and pore throat radius control the magnitude of capillary forces.

Two of these, the wetting angle and IFT, can be altered with surfactants.

The Interface team found that wettability alteration is more important than IFT reduction. The designed chemistries showed amazing potential for oil recovery through persistent wettability modification with completion trials resulting in a 39% increase in recovery.

All in all, Interface is well-versed in surfactant analysis which is influenced by a myriad of factors. We’re here to offer a testing platform that can encompass this complexity and isolate each variable’s impact.

Using Interface’s unique screening capabilities, energy companies have been able to make better-informed decisions with the ability to visualize and analyze fluid behavior at the pore scale. This typically results in better oil production along with cost savings and decreases in water and chemical consumption.

Interface Fluidics provides testing services for energy operators that cover a slew of measurements. One of our valuable analyses involves the screening of chemical additives 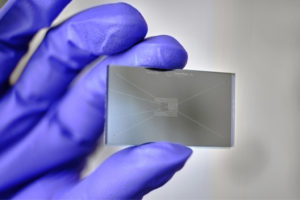 Imagine a laboratory with liters of reagents and samples, where each operation takes place in individual vessels and instruments. What if all of the laboratory 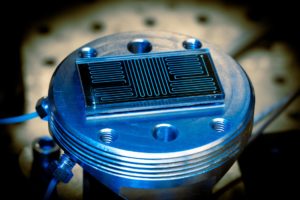 There is growing confidence that hydrogen is set to be the next big thing for the world’s energy landscape. Its market is expected to be